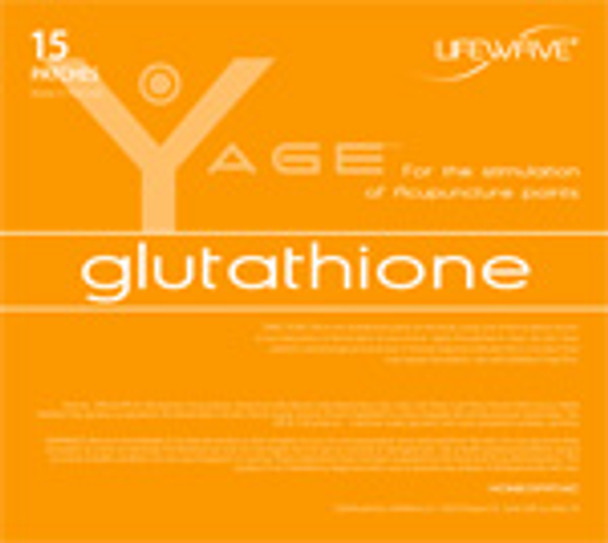 In as little as 24 hours of wearing our Glutathione boosting patch most people are able to experience elevated levels of Glutathione, the body’s master antioxidant.

Glutathione is so powerful that it is able to naturally detoxify the body, strengthen the immune system and turn back the hands of

time with dramatic anti-aging properties. In fact, numerous people have reported that their skin has become more radiant even within a few days of use.

This product will help you to elevate your antioxidant levels, Release stored toxins, Super Charge your immune system, Protect your body from aging, and Improve your athletic performance.

A clinical study recently conducted on subjects wearing the Y-Age Glutathione patch showed remarkable measurable results in organ function. Principal investigator Dr. Sherry Blake-Greenberg found that within a month of use, the Glutathione patch significantly removed toxins from the body, producing improvement in all eight organs of the body studied.

For all the subjects, Dr. Blake-Greenberg tested eight digestive and endocrine system organs and glands before, during and after the study, evaluating the results using an Electro Interstitial Scanning (EIS) system. The EIS measures and interprets resistance to the flow of electric current through fluid between the body’s cells. Dr. Greenberg found that after wearing the Glutathione patch, subjects achieved an impressive reduction in toxins in their organs.

Not only were the improvements measurable, but both groups achieved statistically significant results.

The results of the study are incredible! But, you’re probably wondering, what exactly do these results mean?

Quite simply, every person who wore the Glutathione patch experienced improvements in organ function.

These results are what you would expect from Glutathione, a potent antioxidant. According to Dr. Blake-Greenberg, “The patch boosts the antioxidant production at the cellular level, which increases cell energy to push out toxins from the organs.”

“An increase in Glutathione creates an immediate response at the organ level,” she explained. “The cells move toxins to the bloodstream, which are then drained through the lymphatic system. The cells work overtime to detoxify the body.”

David Schmidt, LifeWave’s founder and CEO, enthused about the study’s results. “The results were strong enough that within this sample size we achieved statistical significance. This is just another way of saying the results of the study are scientifically acceptable,” he stated.

“When you wear the Glutathione patch five days per week, during the first month of use, 50 percent of your body’s organs will show an improvement in function,” David stated. “This alone is fantastic!”

“But more remarkable is that the results of this study show that when you wear the Glutathione patch every single day, all organs in the body will improve!”

Dr. Homer Nazeran of the University of Texas, El Paso is currently writing the results of the study as a scientific paper. We’ll definitely keep you informed when the study results are officially published.

MSRP:
Now: $89.95
Was:
Benefits   Increase your energy and stamina   Convenient Non-Transdermal patch; nothing enters the...

MSRP:
Now: $59.95
Was:
NEW SLEEP TECHNOLOGY We’re all accustomed to thinking that we have to put something into our body (like vitamins) to improve our health. While proper nutrition, water and exercise are a...

MSRP:
Now: $89.95
Was:
Y Age Patches from Lifewave Our Carnosine Booster is designed to repair some of the effects of aging.

MSRP:
Now: $34,995.00
Was:
Cryo 21 - Body Contouring - Facials - Lip Volumizing - Pain Relief Adipose fat cells are more sensitive to cold than the surrounding area, when cooled they undergo a process of slow and gradual...

The METRUM Cryo-T Elephant is a new type of device for facial and localized cryostimulation, that utilizes liquid nitrogen(LN2). It’s innovative construction allows for effective...

MSRP:
Now: $89.95
Was:
Y Age Patches from Lifewave Our Carnosine Booster is designed to repair some of the effects of aging.

MSRP:
Now: $2,495.00
Was:
The Ideal Light Facial System  Red Light therapy with NIR Near Infrared for the face. Designed for use with Ideal Light Red Light Body Pads    Under the chin is all red diodes...

Avacen 100 - Demo unit - slighty used  Do you seek pain relief and muscle relaxation without side effects?  Are you living with the pain of chronic arthritis joint pain? Are you...

Light Stim Red Light Bed with Facial Add On Lightstim Multiwave technology emits multiple colors together. Lightstim is the First Bed to gain FDA Clearance for the temporary relief of...

MSRP:
Now: $34,995.00
Was:
CryoMed Mini  A Smaller more affordable Cryo Chamber.  The Mini model has its CE and ISO certificates and meets the most advanced quality and safety standards and has the same high quality...